Join me in Glen Cove, NY October 1 – 4, 2020 for the inaugural Romancing the Gold Coast

The winner of the $5.00 Amazon gift card from Julie’s last newsletter is:  Susan Wilkinson!

If you’d like a chance to win cool prizes from Julie each month, just sign up for her newsletter at https://juliejohnstoneauthor.com/subscribe/

I’ve found fictional characters are quite like my kids—they have a mind of their own!

When I sat down many months ago to write the 10th book in my Highlander Vows: Entangled Hearts series, I had a certain plot in mind for my hero William MacLean. I did not know my heroine yet, so imagine my surprise when I started to think about her, and she turned out to be a woman who was in possession of a magical gift!

I have to say, having travelled to Scotland several times now and having researched so much for my Highlander Vows series, I have learned just how much the Scots believe in mystical things, and if you have read any of the other books in my Highlander Vows series, then you know that I have threaded magic and legends throughout the books. This book has proven no different!

I am in LOVE with my hero William! He has a lot of heavy baggage to overcome, and he fights himself tooth and nail to protect his heart. And I ADORE my heroine, Ada MacQuerrie! She has her own problems to wrestle with, and she does it with sass and finesse!

I do so hope you will consider pre-ordering the book! It releases November 22, which is just in time to binge read it before Thanksgiving or to hide away after you enjoy some turkey with family but are ready to have some YOU time!

You can pre-order the book here:https://amzn.to/2C4vWg3

A bit about the book: 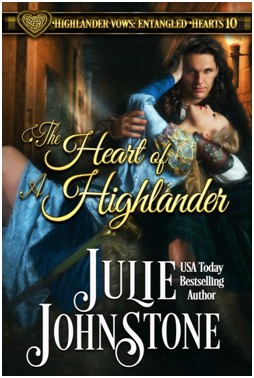 He finally has the chance to clear his family name. The only thing standing in his way is his tempting new wife.

Known as the King Maker, Ada MacQuerrie yearns to wed for love and not the magical gift she possesses. But her ruthless stepbrother doesn’t care what she wants; he just needs her to marry one of his treacherous allies. When an attempt to escape his control and save those she loves goes awry, Ada is forced to choose a husband from the miscreants who’ve come to align themselves with him. All seems lost until a compelling latecomer displays unexpected honor. But is the mysterious Highlander another treasonous Scot simply trying to seduce and manipulate her, or is the man they call Wolf the ally she’s been hoping for?

William MacLean has spent years shouldering the shame of his father’s and brother’s alleged treason against the king. So when the chance to exonerate his family presents itself, he willingly woos an unwanted bride who has the power to topple his enemies. A seemingly simple plan. Except William has survived by keeping others at a distance, and his new wife is not the calculating enemy he expected but a bold, brave beauty he fears could become his greatest weakness.

When passion flares between them, Ada cannot suppress the hope that her dreams could come true. Yet the closer she tries to get to William, the more he withdraws. It’s not until justice is within his grasp and his enemies take Ada from him that he realizes the demons dwelling within him can only be conquered by the light his wife offers. But is it too late to surrender his heart to the woman who already holds it?

For the rest of Julie’s newsletter, sign up at https://juliejohnstoneauthor.com/subscribe/

Permanent link to this article: https://juliejohnstoneauthor.com/november-newsletter-sneak-peek/